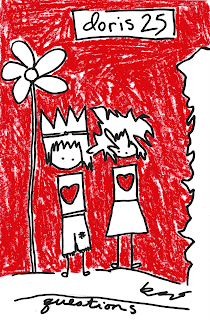 I just finshed Doris 25! but I think it's going to take about a month to get it printed.
My friend Kitty who is a tattoo artist told me that someone got a doris tattoo by her the other day. If it's you, send me a picture! I want to see!
My friend Michael has a new blog with some really sweet dance videos on it.
techtivist.blogspot.com check it out if you like that kind of thing.
Posted by doris zine blog. for website go to dorisdorisdoris.com at 6:07 PM 2 comments:

I just got the HPV zine by the Down There Health Collective, and it is so good. To get a copy send $2 in money or stamps to hpv zine, 737 Quebec Place NW, WDC, 20010. It is really informative and comprehensive. My sister helped edit it a lot.
to get the pdf file, you can email them at www.downtherehealth@mutualaid.org or at www.myspace.com/downtherehealth .

what I'm reading:
That's Revolting: Queer Strategies for Resisting Assimilation, ed Mattilda
All I'm Asking for is My Body, by Milton Murayama
Posted by doris zine blog. for website go to dorisdorisdoris.com at 8:01 AM No comments:

Consent Thought Manipulation Is Not Consent

Part of the tradition of punk is getting drunk and fucking, but I'm tired of everyone being fucked with when they don't want it. I don't know if statistics are higher in the punk scene, if childhood sexual abuse survivors are drawn to this rebellion, but almost ever girl I know was abused when they were young, and most of the trannies, gender queers and guys I know too. My guy friends who were abused almost always have never heard of it happening to boys, they almost always don't want to talk about it. It is terrible, the isolation and silence of it all. And almost everyone I know has had shit happen to them when they're older. People fucking them when they're drunk and couldn't give consent, people fucking with them when they're sleeping, people manipulating them into false consent. Consent through manipulation is not consent. It is not a game. It is real, the damage it does.

Consent is about asking. It's about getting verbal permission. It's about wanting to know the real answer, trying to get to the real answer, not just hoping to get laid. Consent is about believing someone when they say they don't want to. It's about looking for the signs, a blankness, a nervous laughter, a pushing away, and not trying to overcome the resistance. Consent is about wanting to do it because the other person wants to do it too, totally. It is about dropping the game, not trying to make the person feel guilty if they don't want to have sex, not making the person feel guilty if they want to stop something that's already started, not pressuring them. It's about respecting the humanity of the person you want to fuck. Because we are human and real and punk should be about the humanness of us all, about the smell of us and the dirt of us and the anger inside of us.

Punk should be helping each other purge the shit that our families shoved down our throats, or whoever shoved it. It should be screaming away the horror of it all. It should be anger at the world, at the meaninglessness and the stupidity. If we are going to reject all that mainstream society has to offer, we should reject the twisted fucked up way they offer up sex, and we should fight against the rape culture just as strongly as we fight against everything else.

For me, I didn't know really how to give consent. I was so used to just letting whoever wanted to fuck me, fuck me, because that's what I'd been told I was good for, and as soon as someone showed interest in me, I was afraid they'd want to fuck, and I wouldn't be able to say no, so I'd just try to jump ahead and get it over with. Sometimes it would turn out that they hadn't really been thinking that at all. I learned to give consent by asking for consent. I'd ask, is this ok? do you want to be doing this? Is it ok if I kiss you? Is it ok if I take off your pants. And I swear to you, you can still be passionately ripping each others clothes off and still asking these things.

So repeat after me: I will not get into bed with someone who is passed out or sleeping and start touching them. I will not try and make out with people who are blacked out drunk. I will not sleep next to someone and pretend like I just want to sleep when really I want to fuck and I might start trying to in my sleep. I won't try to talk anyone into doing something they don't want to. If I'm going to get drunk and fuck, I will bring condoms, and I will remember to put the fucking thing on. If I am going to fuck, I will use a condom and I won't complain. I will ask for consent. I will ask for it again if the person I am having sex with starts to seem like something's not right. I will look for signs. I will ask again. If someone says they just want to kiss, I promise I will just kiss them and not try to go further. If someone says they don't want to do it, I will believe them. If someone is getting drunk with me and they say they don't want to have sex, but then later start to act sexy when they get extra drunk, I will double and triple check about it, I'll remind them that they didn't want to before, and may be I'll just go ahead and say no.

I want to recommend the zine Support. I put it together, but it's stories and articles from lots of different people, about consent and supporting sexual abuse survivors. You can order it from me for 2.50 at PO Box 1734, Asheville, NC 28802. or thought the dorisdorisdoris.com website. also, there is a list of questions about consent that my friend Andrea and I wrote for a workshop we did on consent. This list of questions has been really useful for a lot of people. It's in the Support zine, but you can also read it at http://www.anarcha.org/sallydarity/consent.html
Posted by doris zine blog. for website go to dorisdorisdoris.com at 10:23 AM 3 comments:

day one.
when you are allergic to everything, mold and cats and all animals and everything else, it makes it hard to stay places that aren't home. We got to Ohio. Stayed two nights at my friend Talcon's beautiful house that is part of a commune, but not communey the way it probably was in the 60's when the people all lived in one house together to start out with, and the goal was to raise kids collectively. Now it is lots of houses, and once a week pot-lucks, and certain decisions made together. Mostly older people.
I had in my mind a stereotypical idea of what a house in a commune would be like, scrubby, put together with scraps and whatever, but it is a beautiful lightfilled house, built by a woodworker, with windows everywhere, a whole side atrium with plants going up and hanging down, two stories. and a sauna. After two nights with my sister and her cat in the basement room, and my lungs closing down, I decided to sleep in the sauna.

day two
Sometimes a place just feels right and there's no explaining it. That's how I felt about Ohio. But then when we got here this time, it wasn't the same. Athens County. Maybe it was just that the leaves were gone from the trees. May be it was just that we needed home so badly and so right away. It felt ok, just not right. Then we drove down to the county we stayed in last year, and it felt like I could breathe again. It felt like this is where we belong. It felt so different and I can't say why. The land is similar, some woods, some fields, rolling hills, some falling apart houses, some trailers, some new houses. horses. goats. But it felt entirely different.

We went and looked at a yurt for rent, for temporary, while we look for something more permanent. It is on United Plant Savers land, which is a group for the preservation of endangered medicinal plants. And we stopped my the house of Joe and Wendy, who I had just talked to on the phone, and woke them up from naps, but they were so nice. They invited us to a New Years party, "it's a boring party - starts at 6:00, ends at 9." Perfect. And they invited us to come cook in their kitchen before hand. The longer we sat there the more they brainstormed up ideas of places we could live, until the brainstormed up the most beautiful country house with a garden and woods and a pond. we just have to try and get ahold of the owners before they leave Alaska and head to the Arctic Circle.
Posted by doris zine blog. for website go to dorisdorisdoris.com at 10:22 AM No comments: